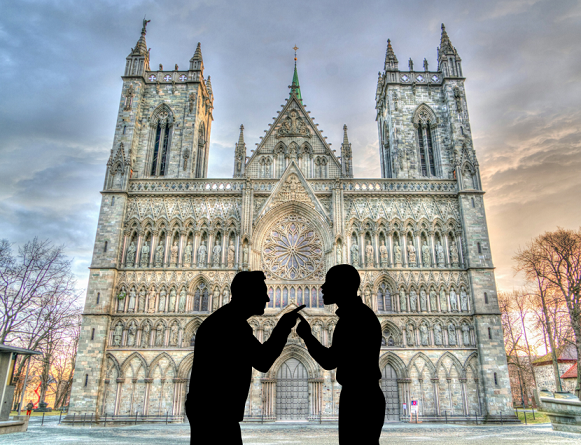 When I was young, there was an entertaining TV series called Highlander. The main premise of the show was that the protagonist, a man named Duncan MacCleod, was an immortal being who battled other immortals for global supremacy. As the theme goes, certain individuals were blessed to be immortals and only found out about this power upon their first death.

The recurring catchphrase of the show was as compelling as its many electric fight scenes: “In the end, there can be only one!” The “one” was of course a reference to the final immortal. When this person had finally defeated every other immortal opponent, he or she would reign for eternity as the ultimate warrior.

Taking out the obvious issue of trying to physically eliminate all competitors, the myriad church denominations of the world sometimes engage in a type of spiritual battle for ultimate supremacy. They vie for the crown of being the truest representation of what the Bible intended the church to be and, as expected, there can be only one!

In a moment, I will show that this issue has literally existed for as long as the church has. However, I have been tracking the matter for quite some time and it seems clear that the battle is heating up. As our world continues to devolve into further lunacy, certain churches struggle to stake their claim as the “true” or most complete denomination on earth.

It must first be mentioned that most denominations who seek to convince others of their supremacy do not typically state things so plainly. They don’t come out and say, “We are the greatest denomination and you must be a part of it to be saved!” No, it’s rather more subtle than that most of the time.

For a few examples, I have summarized several trains of thought that exist today.

“We are the true church that traces its lineage back to the apostles themselves. We are the spiritual descendants of Peter, whom Jesus gave headship over the church. Apart from us there is no salvation.” (CCC 846)

“We are the ‘remnant church’ of the last days. We are the church who keeps the commandments of God.”

“We are the church that exercises the full gifts of the Spirit, because we speak in tongues. We ‘have the Holy Spirit’.”

“We are the church who is dedicated to holy living. We proclaim the necessary teachings about sanctification.”

If you read between the lines—and these views are typically spelled out in the details of their beliefs and on the pulpit—what they are saying becomes clear. If you are not part of “our” denomination—be it Roman Catholic, Adventist, Pentecostal, 3CU, etc.—then you are on the outside looking in.

All this creates an “in group” and an “out group.” For all intents and purposes, if you aren’t a part of a particular denomination then your salvation is uncertain (at the least). Certainly, many churches do not hold to such teachings. The truth, however, is that more do than you may think. Again, if you read between the lines.

I want to bluntly and flatly state that any such view should be anathema.

All notions that salvation can be limited by the location of our church, by who we rub shoulders with, or by any human control whatsoever should be completely condemned.

Why? Because Scripture clearly teaches that there is indeed one church: the corporate body of believers that are unified by our common faith in Jesus and our commitment to live out the faith through action. There is no “if you are also part of this denomination, or if you also focus on this collection of teachings,” or anything of the sort.

Paul often discussed what it meant to be a part of the church. That is, the global body of believers (often spelled with the “little c”) and not a specific denomination. As previously mentioned, this issue arose at the very onset of the church’s existence because something like denominations were already forming. The fabric of denominationalism was not sown at the Great Schism or even as a result of the Protestant Reformation. The spread of denominations has certainly intensified over time but it has always been observable.

In numerous epistles, Paul described the friction that existed between the “circumcision group” and the Gentile converts. The circumcision group was comprised of Jewish converts that continued to believe that the laws of the old covenant needed to be kept. Many of these were laws that Paul specifically addressed as being fulfilled in Christ (Col. 2:16-17). But it wasn’t enough that they try to keep the laws. These individuals tended to force OT law keeping down the throats of the new Gentile converts, creating a serious problem in the early church.

At one point, Paul even “opposed Peter to his face” because he had ceased keeping unnecessary aspects of the Jewish law but capitulated to the circumcision group when they were around:

“But when Cephas came to Antioch, I opposed him to his face, because he stood condemned. For prior to the coming of some men from James, he used to eat with the Gentiles; but when they came, he began to withdraw and separate himself, fearing those from the circumcision” (Gal. 2:11-12).

This is one example of how mini “denominations”—ways of classifying believers—were forming; there was the group who believed you had to keep the Mosaic Law and the group that did not. This may not fit with a truly robust definition of a “denomination,” but it certainly fits the basic criteria. There was an “us” and a “them,” and the two struggled to even keep company (as Peter’s hypocrisy illustrates).

But there is further evidence of different factions springing up at the earliest times. In 1 Corinthians, Paul addressed groups who wanted to classify themselves by leader:

Paul’s response was succinct and powerful: “Is Christ divided? Was Paul crucified for you? Were you baptized in the name of Paul” (1:13)? The passage continues by further emphasizing that baptism had indeed been another (but connected) source for the divisions (1:14-17).

Paul’s point should have been clear enough. Being part of the church is not about who preached to you or who baptized you; it was about the one whom the preaching revealed and whom all believers are baptized into. No matter how you came to believe, who baptized you, or who your church leaders are, all are under the Lordship of Jesus himself.

This is made clear in other texts, too. Take what Paul said to help heal the friction between the Gentile converts and the circumcision group in Galatians 3:28: “There is neither Jew nor Gentile, neither slave nor free, nor is there male and female, for you are all one in Christ Jesus.” The concept of being “one in Christ Jesus” is consistent throughout Scripture (Eph.2, 1 Cor. 12:12-31).

Being a member of the body of Christ (i.e. the church) is not dependent upon age, race, gender, location, or time period. It’s also not dependent on your pastor, your priest, what form of catechesis you go through or even what denomination you claim to be a part of.

Then what is it that makes people “one in Christ Jesus” and a part of the church? Well, it’s the same thing that enables salvation. Romans 10:9 reads: “If you declare with your mouth, ‘Jesus is Lord,’ and believe in your heart that God raised him from the dead, you will be saved.” Now, this commitment of faith was also expected to be manifested through action. Faith and works go hand in hand, and Jesus told his followers that anyone who follows him must  “deny themselves and take up their cross and follow me” (Mt. 16:24).

Scripture details other essential teachings that unite all believers in the church. On these issues, deviations are not permitted. Many of these formed the basis for the later Ecumenical Creeds, which were intended to be “catholic”—that is, universal—in nature.

These essential beliefs are sometimes called “kerygma,” a Greek word that literally just means “proclamation” but came to refer to the core teachings of the gospel. Paul described some of these in 1 Corinthians 15:

One cannot be a Christian—a part of the greater church body—if he or she willingly and knowingly denies these teachings. To subtract any part of this is to mutilate the gospel message. If Jesus had not accomplished these feats, then he simply wasn’t God’s Messiah. Thankfully, Jesus did fulfill all these requirements.

The central point in all these examples is, again, that being part of the church depends absolutely nothing on what denomination you are involved with. Sure, there are heretical groups (like unitarians) that do not confirm the essential teachings of Scripture, such as the Trinity, the divinity of Jesus, and others. We should not only avoid such churches (if you can call them that) but should make every effort to repudiate their claims.

However, those represent a very small percentage of denominations. Most traditions affirm the teachings of Scripture previously mentioned and are largely separated by non-essential matters. I invite you to look into the fundamental beliefs of a broad spectrum of denominations. You will find that the parallels far outweigh the discrepancies.

And frankly, this is exactly what we should expect.

If you think about it, the global church body can only be logically connected by our central beliefs. Believers have existed from scattered countries around the world for most of the last two millennia. Being part of “the church” cannot be reduced to what denomination one aligns with or it’s precise governmental structure, what their preferred worship style is, who their leaders are, how they view the elements (bread and wine) of the Eucharist, how frequently they fast, or anything of the sort.

It is to say that, given the time and distance that separates the faithful, it could only be a commitment to the essential teachings of Scripture that ultimately unites believers. Nothing else could reasonably transcend time, culture, socio-political boundaries, church leadership, and similar factors.

The church’s identity is found in its head, who is Jesus.

Do you believe in your heart that Jesus is Lord, that he died for our sins, conquered the grave, and then ascended to the right hand of the Father?

Do you carry your cross and live by the essential teachings of Scripture, to the best of your ability?

These matters are what define a true believer. This is what secures one’s place in “the church.”

And the church is the greatest denomination ever.

Looking for a new book to read? Check out my books below: