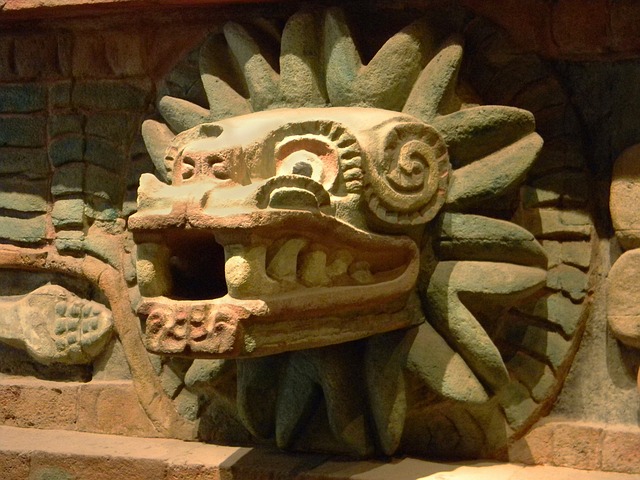 (Right now (11/27-28 only) I am offering the eBook versions of my books God Made the Aliens and Spiritual Things  for free. Simply click the titles to download)

The people of Teotihuacan were an extremely interesting group, to say the least. Nowhere is this more evident than in their adoration of the “Feathered Serpent.” This mysterious creature—which was also popularly called Quetzalcoatl, by the Aztecs—grew to nothing short of god-like status to many people living near the pre-Columbian Americas (collectively referred to as the “Mesoamericans”).

But was the Feathered Serpent really a god . . . or was it a devil?

This entity was typically depicted as a long, serpent-like creature that possessed feathers (or wings) on various parts of its body. As the picture on this blog shows, the feathers are especially prominent around its head, making it somewhat resemble a lion. It is almost universally accepted that the serpent aspect is supposed to display its relationship to the  “earthly realm.” It moves along the ground like all other worldly creatures.

While putting wings on a serpent may seem very out of place, it actually makes a great deal of sense in this case. Like many other cultures of that day, the people of Teotihuacan believed they had been placed on Earth by “sky beings.” That is, entities from somewhere else in the cosmos were responsible for their creation. The feathers, or wings, prove that the Feathered Serpent also had supernatural powers and that it could ascend to the greater realm of existence. The Feathered serpent had roots in our world, and also in the world of the heavenly beings.

At the surface-level, the Feathered Serpent should have us scratching our heads a bit. It has to be remembered that communication across distant lands was far, far different in that day and age. There were no telephones or telegraphs, no airplanes or helicopters, or any of the like. There were also no known land bridges between the continents at that time, and few cultures (if any) were able to traverse vast oceans via ship. It was absolutely nothing like it is in modern times.

Yet, serpent figures were revered around the world by geographically separated peoples. Teotihuacan—which was located in the modern-day Valley of Mexico—is nearly 8,000 miles away from, say, ancient Israel. The people who were worshipping the Feathered Serpent lived on the opposite side of the world from the Jewish people of the day. Without question, the serpent is a tremendous character in the Bible as well. A serpent deceived Adam and Eve, causing sin to enter the world (Gen. 3). That same serpent is later identified as a horrible and treacherous monster (Is. 27:1). In due time, we came to understand that the serpent is Satan himself: a fallen, evil angel who possesses incredible power (2 Cor. 11:14, Rev. 20:2).

Homage to great serpents was also paid in Africa, Egypt, Asia, and even North America. Just a short drive from where I live, the Great Serpent Mound is evidence of the latter. It was constructed by the Adena culture, or perhaps an earlier group of Native Americans, to house their dead.

All of this becomes even more unusual when you consider Teotihuacan’s greatest architectural structures, and how they correspond to others around the world. I wrote about this extensively in this blog, and in God Made the Aliens.

There is an incredible difference here though: Mesoamericans deified the Feathered Serpent, while the Jewish people living in the Middle East viewed their serpent figure as the complete antithesis of God. The enemy of Yahweh and His people was thought to be a savior of sorts by the Aztecs, Mayans, and other groups.

This is where things get particularly interesting. The Temple of the Feathered Serpent—which is thought to have been built near the end of the 2nd century BC—has some really mysterious qualities to it. Beneath the pyramid is a series of interconnected tunnels, all leading to a three-chamber core in the center. The people of Teotihuacan sprinkled powdered pyrite on the ceilings, in order to create a “starry sky” appearance. On the ground were rigid carvings that mimic Earth’s terrain, and statues of people gazing at the stars above. Strangest of all is that the chambers were intentionally flooded with liquid mercury, in order to create a massive underground lake.

This was a very extensive process.

But why do all of that? What is the significance? It is believed that they did this to create a mini-cosmos in the depths of the ground: a miniature “underworld,” so to speak. The Feathered Serpent was thought to have come from (and to have preferred) this watery underworld, but was able to ascend or descend to all three great realms of existence: the underworld, the earth, and the heavens. It was thought to seamlessly slither (and sometimes fly) between the three locations.

That being the case, it had power over the whole universe.

Curiously, the Feathered Serpent was chiefly a figure of the underworld. It was a creature with its origins in death. Recall the Great Serpent Mound in Ohio, which was intended to house the dead. Moreover, many cultures—including the Mesoamericans—often made human sacrifices in order to appease the serpent god. Nothing short of human blood would satisfy its thirst. This theme is pretty consistent with all prominent serpentine figures across the world and throughout history (the Greek “Medusa” even comes to mind).

If we really think about it, the Judeo-Christian faith affirms these same ideas.

Does the Bible not depict Satan (the “great serpent”) as being connected to the underworld?

Does the Bible also not depict Satan as a figure of incredible power, who has a connection to the heavenly realm?

Is it not said that Satan is “roaming throughout the earth, going back and forth on it” (Job 1:7)?

In effect, isn’t the “angel of light,” as Paul called him (2 Cor. 11:14), connected to the same three major realms that the Feathered Serpent is: the underworld, the earth, and the heavens?

The parallels are absolutely unmistakable, if you ask me.

In conclusion, this shows us some very interesting things. The first is that there is a cross-cultural consensus that a powerful, otherworldly figure exists who is strongly associated with a serpent. The reasons offered for why the serpent figure is used vary, but there is no mistaking this point. This is further evidence that the same supernatural beings have visited the entire world. Not only do other beings exist, but they have shown themselves to us in many, many ways.

Second, it shows that this figure is also viewed as being strongly associated with dark or malevolent forces. While the Bible portrays this figure as the antithesis of good, and the opponent of God and His people, this same figure came to be worshipped by other cultures.

Third, it shows that the Feathered Serpent is more devil than deity. It is an evil entity that was able to convince a great many people to worship it as God, sometimes even demanding its followers to sacrifice their fellow man for its glory.

It pains me to say it, but the same force that propelled the worship of the Feathered Serpent in Teotihuacan is still very much at work in the world today. While the statues may not exist in plain sight, its power among the people certainly does.

In fact, the Feathered Serpent may now be showing its face in more ways than ever.

Looking for a new book to read? Click the links to check out my titles on Amazon: