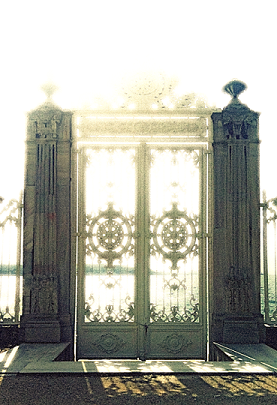 (Don’t forget to sign up to receive all of my blogs and updates automatically–simply click here and never miss an article!)

History is replete with images of God and the angels sitting on clouds and floating around in the sky. It is probably fair to say that most of us make a similar connection whenever we think about heaven. But is this an accurate depiction of heaven, and do God and the angels really dwell somewhere “above” us?

Before consulting Scripture, consider a quick philosophical point: If God created the universe, how could He exist within it? Obviously, God could not be confined within something that He would later (even if only causally) bring into existence. For comparison, workers could not create a building if they were standing inside of it. Technicians could not build a car if they were already sitting within it. A bird could not make a nest if it were already living in that nest. In each of these cases, the agent creating the object would have to exist outside of it.

While this point is strong on its own, the Bible provides conclusive evidence that heaven is not in the sky.

For starters, consider when Elisha and his servant were surrounded by an entire army of Aramean soldiers. Though the servant was extremely alarmed by the situation, Elisha was not. 2 Kings 6:16-17 records Elisha’s response to his servant and the events that followed:

“So he answered, ‘Do not fear, for those who are with us are more than those who are with them.’ Then Elisha prayed and said, ‘O Lord, I pray, open his eyes that he may see.’ And the Lord opened the servant’s eyes and he saw; and behold, the mountain was full of horses and chariots of fire all around Elisha.”

This is one of the amazing moments within Scripture where we get a peek into the workings of the heavenly world. It’s almost as if God peeled back the curtain that prevents us mortals from peering into heaven and allowed Elisha’s servant to see the full scope and magnitude of all existence. The angelic beings (and their chariots) he saw certainly weren’t from somewhere in outer space; they appeared in an instant. They were present with both him and Elisha the entire time but were veiled from his sight.

We see something eerily similar when we look at the birth of Jesus. Right after he was born, a group of shepherds received quite a fright. While they were out in a nearby field, it is recorded that an angel “. . . suddenly stood before them, and the glory of the Lord shone around them; and they were terribly frightened” (Lk. 2:9). This is another case where, seemingly out of nowhere, an angel appeared. Furthermore, these very same shepherds would see more astonishing things thereafter. Luke 2:12-14 records that a “multitude” of angels appeared in just the same way.

Notice the abrupt and unexpected nature of these events. In fact, the word used specifically in 2:13—which is exaiphnés—most accurately translates as either “suddenly” or “unexpectedly.” The angels were unseen, then were instantaneously visible all at once.

In the book of Ephesians, the apostle Paul literally referred to the existence of the “heavenly realm” on multiple occasions. In all, he mentioned this sphere of existence on more than five occasions (1:3, 1:20, 2:6, 3:10, and 6:12). Most notably, he said: “For our struggle is not against flesh and blood, but against the rulers, against the powers, against the world forces of this darkness, against the spiritual forces of wickedness in the heavenly places” (my emphasis).

As something else to consider, we could examine Jesus’ post-Resurrection appearances. Jesus showed himself to his disciples, and many others, repeatedly after the Resurrection. He appeared to Mary Magdalene outside of the tomb just after he rose from the dead (Jn. 20:15). He appeared to the horrified apostles on two separate occasions—with more than a week between the visitations—as they huddled behind a locked door (Jn. 20:19, 26). Prior to that, Jesus met the apostles while they were out fishing in the Sea of Tiberias (Jn. 21:1). He also appeared to more than five hundred people at the same time (1 Cor. 15:6).

My personal favorite appearance of Jesus was on the road to Emmaus, where he walked and talked with two of his disciples for the duration of the seven-mile journey from Jerusalem to Emmaus (Lk. 24:13-35). Right after Jesus blessed the meal, and the disciples finally began to understand the strange man’s identity, the Gospel of Luke records that Jesus proceeded to “vanish from their sight” (Lk. 24:31). Here, Jesus did not utilize trap doors, magic curtains, smokescreens, or anything of the sort. Rather, he had completely disappeared; he was there, and then he was gone.

The question that must be asked with regards to these appearances (and disappearances) is obvious: where was Jesus the rest of the time? There is not a single verse in the Bible having to do with the post-Resurrection appearances that mentions how Jesus left the scene. Barring the Ascension—where Jesus both literally and symbolically departed “back to heaven” for the final time (Acts 1:9-11)—there is no record that Jesus flew off into the atmosphere, slipped away and hid somewhere, or simply wandered away from those around him.

Just as he had done after walking on the road to Emmaus, Jesus seems to have been able to utterly vanish from human view at will. Frodo Baggins has nothing on Jesus! Clearly, he was slipping into another world, not travelling into space.

If all of this is true, why is heaven typically thought to exist in the sky?

For one thing, it is viewed this way because the language of the Creation narrative indicates it. Simply put, the heavens and the sky can function synonymously and are sometimes derived from the same word (like the Hebrew, haš-šā-ma-yim in Gen. 1:1). The second reason is that the heavens—meaning here, God’s abode or the “heavenly sphere”—is also discussed as being “up there,” above the earth. Consider the famous statement found in Isaiah 66:1: “Thus says the LORD, ‘Heaven is My throne and the earth is My footstool. Where then is a house you could build for Me? And where is a place that I may rest’?” This is obviously intended to imply the image of God sitting in the sky, with His feet resting upon the earth. Jesus echoed this notion in his Sermon on the Mount (Mt. 5:34-35). Here again, God’s dwelling is in space, and his feet reach down to touch our world.

However, it should be obvious that these are metaphorical statements. If God truly exists above our heads, and rests His feet here amongst us, we probably would have noticed! I may be going out on a limb there . . .

In truth, this type of language permeates many parts of both the Old and New Testaments. So, does this mean that heaven is indeed in the sky after all? Well, not exactly. There is a clear connection between the sky over our heads and the heavenly world inhabited by God and the angels. If you think about it, do we not sometimes find ourselves peering into the sky when we pray, or when we are entranced in spiritual contemplation? I know I do. There is something very intuitive about it: something natural.

When the apostle Paul spoke of his trip—whether that took place physically or in a vision, he could not say for certain—to the “third heaven,” he mentioned being “caught up” into it (2 Cor. 12:2-4). Paul used the exact same word (harpazó) in 1 Thessalonians 4:17, when he described Christ’s return and how the living will be “caught up” to meet him in the air.

Further, some of the most impactful parts of the biblical narrative display the concepts of ascending and descending. At Jesus’ baptism, the Spirit descended upon him (Mt. 3:16). During the Ascension, when Jesus said goodbye to his followers once and for all, he rose into “the heavens” (the sky) before vanishing (Acts 1:9). At Christ’s return, he is described as descending to earth (1 The. 4:16) with his army of angels (Mt. 25:31). Even the fall of Satan is described with similar terminology: “I was watching Satan fall from heaven like lightning” (Lk. 10:18).

These examples show us something very important: going up into the sky and coming down to earth are clearly the best ways we can imagine how the world of the divine connects to our own. Consider the following:

While God and the angels can indeed come into our world and leave their own, they occasionally make a spectacle of their comings and goings. It makes sense that this may be done mainly (though not always) for illustrative purposes; it happens so that we might better understand. It’s not that they aren’t really ascending and descending, because they are. It’s just that they do not have to come and go that way. These acts are for us, not for them.

So, what can we make of all this? Where is heaven?

Heaven is not literally “above us,” nor does it exist in the distant recesses of space. When evaluating this issue from a biblical perspective, nearly every piece of evidence concerning the heavenly abode suggests that it is not contained within our universe. Instead, heaven is another world that is going on right alongside of our own. It is typically hidden from our sight but is unmistakably real.

We might think of heaven as an invisible layer that rests overtop earth: a wholly separate location that still has significant bearing on our own world. The heavenly beings (like Christ and the angels) pass between heaven and earth with ease and completely at will.

(For a visual representation of what I am generally suggesting, please see this clip from the movie, City of Angels.)

In conclusion, heaven is a realm of existence. You may call this a different plane or dimension, if you’d like, but the thrust remains the same. Along with many other things, this explains how angels can appear from nowhere, how demons can spiritually attack individuals without being seen, where Jesus vanished to between his Resurrection appearances, and perhaps even how flying crafts can appear and disappear in an instant.

As hard as it is to comprehend, God, the angels, and the heavenly realm are always present before us. We would all be amazed to know what we are missing: to know what is hidden from our sight.

Looking for a new book to read? Click the links to check out my titles on Amazon:

I am a Christian teacher, author, and lecturer. Most importantly, I am a truth-seeker. My research has led me to both believe in and defend the veracity of the Bible, evaluating my own personal views in light of its teachings along the way. In addition to my blogs, I have written several books: "The Death Myth," "Mind Over Matter: the Necessity of Metaphysics in a Material World," "God Made the Aliens," and most recently, "Spiritual Things." My hope in these endeavors is to give skeptics reasons to believe, to strengthen the faith of those who already do, and to challenge each of us to truly evaluate our own worldviews. View all posts by Brian M. Rossiter

5 thoughts on “Where is Heaven?”