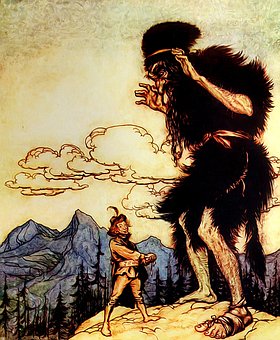 In the year 1890, the French magazine La Nature ran an enormous story. Literally. The article was about an abnormally large human skeleton that had been unearthed at the Castelnau-le-Lez cemetery, in France.

This discovery, dubbed the “Giant of Castelnau,” was made by anthropologist Georges Vacher de Lapouge. His findings were nothing short of remarkable. Based on comparing the recovered humerus, tibia, and femoral mid-shaft with average-sized human bones, de Lapouge concluded two major things: the remains were definitely human, and they probably indicated a person who would have been about 11.5 feet in height.

As is so often the case, the whereabouts of these remains are unknown almost 130 years later, and the story has been largely lost to time. We do, however, know some crucial aspects of this case. The first is that de Lapouge, and three well-respected scientists at the University of Montpellier, examined the bones and felt as though they represented an incredibly tall race of people. Further, we know that the story appeared in La Nature, The London Globe, and The New York Times. The findings also appeared in other places from time to time, and all the reports seem to correlate with de Lapouge’s initial findings.

In the ancient world, giant people were commonplace within the many cultures. For a couple of quick examples, this can be seen on the Abydos King List—found on a wall at the Temple of Seti I at Abydos, Egypt—and through drawings near Saqqura, one of which unquestionably displays a giant being who is attended by much smaller individuals. There is also the Victory Stele of Naram-Sin, a Mesopotamian artwork that clearly displays this theme.

But we can rest assured that there is naturalistic explanation—i.e. one devoid of higher-level, intelligent causation or divine influence—for these phenomena. Mainstream science is never in short supply of those.

The secular “solution” to these findings is gigantism, a disease that causes abnormal growth in children—typically continuing into adulthood—because of an excess in the production of growth hormone in the pituitary gland. But this has never been an adequate explanation. Researcher, Dr. Greg Little, has summarized why this is the case:

“It is a weak attempt to explain away and dismiss the issue. Gigantism is exceedingly rare, so rare that there is no actual incidence statistic for it. America has less than 100 cases of gigantism recoded in its history. In fact, the overwhelmingly vast majority of tall people today, those reaching or approaching 7 feet, do not have the disorder of gigantism. The actual percentage of modern humans who reach 7 feet in height is 0.000007%.”

Given the fact that gigantism so uncommon, it is exceedingly improbable that all of these examples from history can be explained by it. Clearly, gigantism will not work as an explanation, particularly when we are dealing with entire groups of giant people. We might be able to chalk an occasional set of skeletal remains up to gigantism, but an entire community of people? No, not a chance.

Entire communities of people . . . This is where the Bible enters the picture.

The Old Testament speaks several times of the Nephilim, or the “giants.” We are all aware of the biblical Goliath, an elite Philistine warrior who is traditionally considered to have been “six cubits and a span” (1 Sam. 17:4), or 9 feet 9 inches tall. The much smaller David of course defeated the giant with a perfectly placed stone to the head (via a deadly sling), but that’s not what interests me at the moment. What interests me is that Goliath was not the anomaly. He was not a three-in-one-million example of gigantism. Rather, he was one giant person among many others. The Philistines were (or at least possessed) an army of huge people. The Jewish spies that had previously scouted the land said it clearly: “There also we saw the Nephilim (the sons of Anak are part of the Nephilim); and we became like grasshoppers in our own sight, and so we were in their sight” (Num. 13.33).

Maybe the miracle is not so much the stone that slew the giant, but the fact that the other giants threw in the towel afterwards.

The Bible also describes several other groups of giant people. Numbers 13:33 specified that the Nephilim were the “sons of Anak,” but these giants were connected to other surrounding tribes as well. The Canaanites, Ammonites, and Rephaites (or Rephaim) are included; all three of these groups were associated with giants, or the descendants of the Nephilim. Furthermore, the Bible references King Og (of Bashan), specifically because his bedstead was alleged to have been about 13.5 feet in length and 6 feet wide. It is believed that it was probably fashioned to accommodate his massive body (Dt. 3:11). In the same verse, he was also said to have been the only one remaining from the “remnant of the Rephaim.”

King Og was from a line of giants, and he had a giant bedstead. It all adds up.

In ancient times, giant people were often portrayed as kings, pharaohs, military leaders, and other prominent roles. While theories abound on what ultimately became of the Nephilim, the surety of their existence cannot be ignored or explained away. For those who believe in the Bible, the existence of these strange beings is completely unavoidable. Like UFOs and many other strange things, giants are right there in the text, plain as day and clear as crystal.

A truly important question remains though: where did these giants—these “Nephilim”—come from? Who, or what, made them? Good questions indeed . . . but they will have to wait until next time.

Looking for a new book to read? Check out my books below:

“Victory Stele of Naram-Sin.” Department of Near Eastern Antiquities: Mesopo-tamia. The Louvre. https://www.louvre.fr/en/oeuvre-notices/victory-stele-naram-sin

“What is Gigantism?” Healthline. https://www.healthline.com/health/gigantism

4 thoughts on “Nephilim: Giants of the Ancient World”